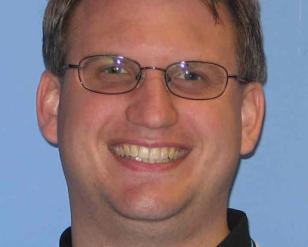 Andru Luvisi has been working at Sonoma State since he took a position as a student assistant in the Library Systems Group in the fall of 1993. He met his future wife on a SSU electronic message board in 1996 and he earned a BS in Applied Mathematics in 1997. He has been focused on information security since 2002, and has served as the campus Information Security Officer since 2011.

Andru is the current curator of the IT Museum, visible throughout the IT hallways and conference rooms (and including a few interactive exhibits), and the current administrator of the SSU digital two-way radio system.

During his free time, Andru enjoys card tricks, amateur radio, and finding errors in Computer Science textbooks. He is particularly proud of his ranking in The Bank of San Serriffe for the errors he has found in textbooks by Donald Knuth.